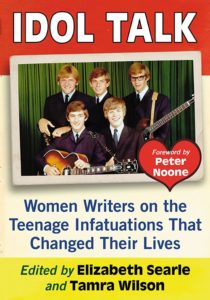 IDOL TALK:
WOMEN WRITERS ON THE TEENAGE INFATUATIONS THAT CHANGED THEIR LIVES

Accidental Birds of the Carolinas

In Hudson’s fictional Ambler County, some of the characters know each other well, some drive by and wave, and some pass unaware they are connected by place and time. Hudson has captured the moment when rural life was still dominant in the Carolinas and able to charm a stranger into staying. Like birds blown off course in a storm, landing in an unfamiliar country, the characters in these stories need a place to roost, somewhere to settle long enough to learn the secrets of their own hearts.

“They arrived by Mustang, by marriage, by hitchhiking. The characters in Marjorie Hudson’s story collection, Accidental Birds of the Carolinas, have strayed — like vagrant birds — from familiar territory to reach a transfiguring moment in their lives. . . . Many of Hudson’s narratives explore themes of family — found, invented or inherited — navigating the often suffocating nature of belonging, or the catastrophes of reinvention.” — Kathryn Savage, Minneapolis-St. Paul Star-Tribune
“Like novels in nutshells, Alice Munro style”— Doris Betts, author of Beasts of the Southern Wild
“Magical scenes, magical effects, vivid dreams, mysterious events. Birds sing through several stories, and by the end of the novella, there’s been a symphony of mockingbirds, whippoorwills, sparrows, frogs, dogs, bees, butterflies and more. Each lost soul connect to the natural world for healing and solace.”
— Deirdre Parker Smith, Salisbury Post
“These are truly great stories. Each voice is so distinct, each ‘bird’ so lost, so misplaced , so in need of someone to listen to its call, its natural music.” —  Susan Ketchin, author of The Christ-Haunted Landscape: Faith and Doubt in Southern Fiction
“Hudson writes movingly about a South we haven’t often seen in literature: the rich terrain occupied by people who, owing to desire, despaire, or some combination of both, have migrated in search of that elusive thing called home.” — Dawn Raffel, author of Further Adventures in the Restless Universe,  former fiction editor of O Magazine
More Praise for Accidental Birds:

““Here is a field guide to the human species in transition….The three longest of these splendid stories are like novels in nutshells, Alice Munro style”— Doris Betts, author of Souls Raised from the Dead

“For any Southerner who’s ever wondered what it’s like to be a Yankee transplant, read Accidental Birds of the Carolinas… — read more at North Carolina Literary Review Online, No. 21 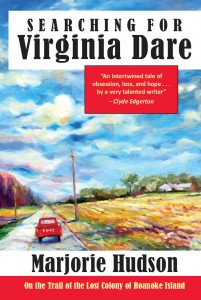 “As fascinating as a detective story. . . . An absorbing, intelligent consideration of national and personal identity, beautifully written.”
— Lee Smith, author of  The Devil’s Dream

Marjorie Hudson’s book Searching for Virginia Dare gained critical acclaim from novelists, reviewers, and historians alike when it first came out in 2002. Part detective story, part road trip, part memoir, it explored the mysterious disappearance of Virginia Dare and the Lost Colony of Roanoke Island. Hudson’s lyrical language and self-revelation brings a fresh flavor to the centuries-old tale of the first English child in America.

This latest edition, Searching for Virginia Dare: On the Trail of the Lost Colony of Roanoke Island, from Press 53, features 33 pages of fresh writing detailing Hudson’s continued fascination with the subject.

In an essay entitled “The Search Continues: New Journeys, New Explorations,” Hudson revisits Roanoke Island on Virginia Dare’s 425th birthday, August 18, 2012. As she travels, she spins tales of her ongoing obsession with the White Doe legend, the kudzu-wrapped landscape of Eastern Carolina, the fascinating hidden world of the Lumbee Indians,  the relationship between an intrepid American woman sculptor in 1850s Rome— creator of the Virginia Dare Venus— and expat writer Nathaniel Hawthorne, as well as discounted theories about what became of the colony that are now finding traction with historians.

Praise for Searching for Virginia Dare:

“An intertwined tale of obsession, loss, and hope—in part truth, myth, and fiction. Hudson proves that a very talented writer can pull off a multi-genre story.” — Clyde Edgerton, author of Walking Across Egypt

“Hudson’s writing style is fluid and poetic…Those who value the art of writing as well as substance will enjoy this “fool’s errand.”
—North Carolina Libraries Journal

“Hudson forges an engaging blend of history, fiction, and memoir that commands the reader’s interest.” — Our State“Hudson has invented a new genre, a sort of parting of the authorial curtain to reveal . . . the commonalities that bind both author and reader to someone of another place and time” — Chapel Hill Herald

“Hudson does a wonderful job of turning what for most has been a staid history lesson into an entertaining and informative read.”
— “All Things Considered,” Public Radio East

What Doesn’t Kill You …
Edited by Murray Dunlap

A collection of essays and stories about near death experiences. Includes Hudson’s Pushcart Special Mention story “Self Portrait in Camouflage.”

Topograph: New Writing from the Carolinas and the landscape beyond
A collection of award-winning stories, essays, and poems from the Novello Press competitions over the past 20 years. Includes Hudson’s story “Home.”

Making Notes: Music of the Carolinas

A collection of essays by North Carolina writers and musicians. Includes Hudson’s award-winning essay “Darlin’ Corey,” about the dog who saved her life.

Scorched in the Birthing: Women Respond to War
Edited by MariJo Moore
A collection of essays, stories, and poems. Includes Hudson’s essay “Sufi Dancing with Dad,” about the death of a peace activist on the first day of the Iraq war.